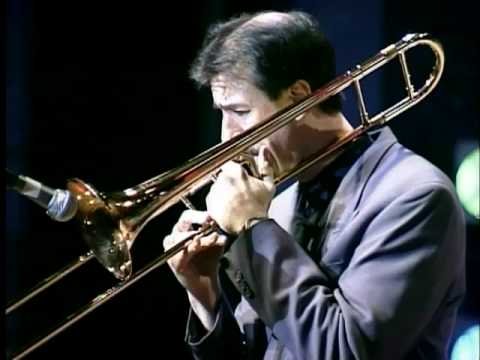 Over the course of the past three decades, virtuoso trombonist/arranger/composer, John Fedchock has risen through the musical ranks to emerge as leader of one of the freshest, most exciting big bands in jazz. His 16-piece John Fedchock New York Big Band is comprised of alumni from major big bands, along with some of New York’s finest soloists in the “modernist tradition”. The group delights in performing Fedchock’s own dynamic compositions and unique arrangements of well-known classics, creating a sound that not only honors but also expands the tradition of the American big band. The band’s five CDs on the MAMA and Reservoir Music labels have all received high praise from critics and extraordinary success on national jazz radio charts. In recognition of his formidable arranging skills, Fedchock is a two-time GRAMMY Award nominee for “Best Instrumental Arranging”. Fedchock’s dense voicings, thick ensemble writing and unique swinging lines have become characteristic trademarks. Regarded as one of the most perceptive and versatile trombonists on the scene today, Fedchock’s reputation as a soloist is widely acknowledged. In addition to performances in New York City, the band has also toured nationally and performed abroad at international jazz festivals. The New York Times has applauded the band’s “cheerful syncopation, served with spit-and-polish precision”, and the Chicago Tribune has characterized Fedchock’s style as “an unabashed celebration of the large band format.”

On The Edge
Like It Is
The Chopper
Moment’s Notice

“The charts are first-class, and there’s a profusion of solo talent.”
-JAZZ JOURNAL INTERNATIONAL

“Fedchock is making a name for himself. His charts surge with the drive and momentum that always characterized Woody Herman’s bands. And they are performed with bravura enthusiasm by a superb collection of players, executing the music with a particularly New York-tinged blend of conciseness and energy.”
-LOS ANGELES TIMES

“This is big band music that’s as much inspired by John Coltrane as Louis Armstrong.”
-THE NEW YORK SUN

“Fedchock is on his way to being accepted into the Hall Of Fame of Great Arrangers.”
-MAINLY BIG BANDS

“The ensemble never misses a beat, while soloists are sharp and inventive. This is big band music that pays earnest homage to the past while advancing inflexibly toward the future.”
-ALL ABOUT JAZZ

“Fedchock is more than just a proficient soloist well-versed in big band idioms. The extroverted nature of his scores, the brisk interplay between his solo passages and his orchestral accompaniments and the radiant quality of his brass-choir writing amount to an unabashed celebration of the large band format.”
-THE CHICAGO TRIBUNE

“What an impressive ensemble the New York Big Band is, swinging with ease and assurance through Fedchock’s demanding charts while unleashing enough firepower to blow the roof off any nearby structure.”
-THE JAZZ REPORT

“Fedchock’s prowess as an arranger has proven a magnet for top-drawer talent.”
-JAZZIZ

“John Fedchock’s music exemplifies some of the brighter orchestral writing for the big bands playing around these days. His harmonies and textures are colorful and always interesting. Furthermore, within the idiom of a modern big band, his music is jaunty, and it swings. The entire band plays with a bright sparkle, lending dignity and class to these intelligent big band arrangements.”
-JAZZ TIMES

“A mix of fire and finesse.”
-THE PALM BEACH POST

“Fedchock has assembled a crackerjack roster of young and seasoned Big Apple musicians, and the writing and soloing will knock you into the next county.”
-JAZZ SCENE

“The New York Big Band is a finely lubricated, precise ensemble whose well-structured charts and sprightly solos are wonderfully reminiscent of the best work by Woody Herman’s Herds.”
-STEREO REVIEW

“The next step for big band. John Fedchock takes tradition to a new place.”
-SCENE MAGAZINE

“With the force of a resounding shout chorus, John Fedchock’s rocketing reputation as a bandleader and arranger continues to soar over Gotham and the rest of the jazz world on the strength of his finely tuned 16-piece New York Big Band.”
-SEATTLE WEEKLY

“One of this band’s greatest strengths is the variety of styles presented, including traditional, straight-ahead big band writing, as well as more progressive and innovative numbers. A cohesion is acheived amongst this variety by the mere fact that the band swings on every note.”
-INTERNATIONAL TROMBONE JOURNAL

“This is a wonderful band; long may it swing.”
-JAZZ TIMES

John Fedchock New York Big Band:  “Like It Is” 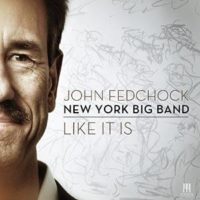