What the Critics Are Saying About John Fedchock

“As a soloist, Fedchock’s playing is simply phenomenal. Flawless technique, a melodic approach, and a warm, lush tone are trademarks of his improvisational style. Fedchock achieves a sense of freedom and ease in his playing that defines true artistry.”
-INTERNATIONAL TROMBONE JOURNAL 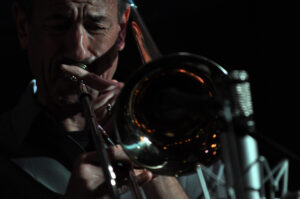 “John Fedchock has his own trombone sound. Each note is measured and precise, flowing easily and deftly across the dense musical landscape like a small voice whispering in the wind. Unlike many of his contemporaries who choose to be more boisterous, their styles confrontational and in your face, Fedchock’s phrasing is more elegant and sinuous, almost pianistic.”
-PITTSBURGH POST-GAZZETTE

“Fedchock plays with a dark, virile, sharply etched tone, and he’s as well organized and aware of texture in his articulate solos as he is in his terrific arrangements.”
-Neil Tesser, CHICAGO READER

“Fedchock likes a well-played lyrical line. He plays bop lines, or neo-bop lines and can enter the avant-garde world in a hurry. With his startling combination of speed an articulation, Fedchock smokes with an up-tempo lyricism simply not heard these days.”
-THE CLEVELAND PLAIN DEALER

“Fedchock is a swift, smart player whose slide technique is so polished that at times he seems to be playing a valve instrument.”
-THE VIRGINIA PILOT

“Tasteful and sophisticated, John’s playing is always impressive. Everything about his playing and demeanor exudes class.”
-INTERNATIONAL TROMBONE JOURNAL